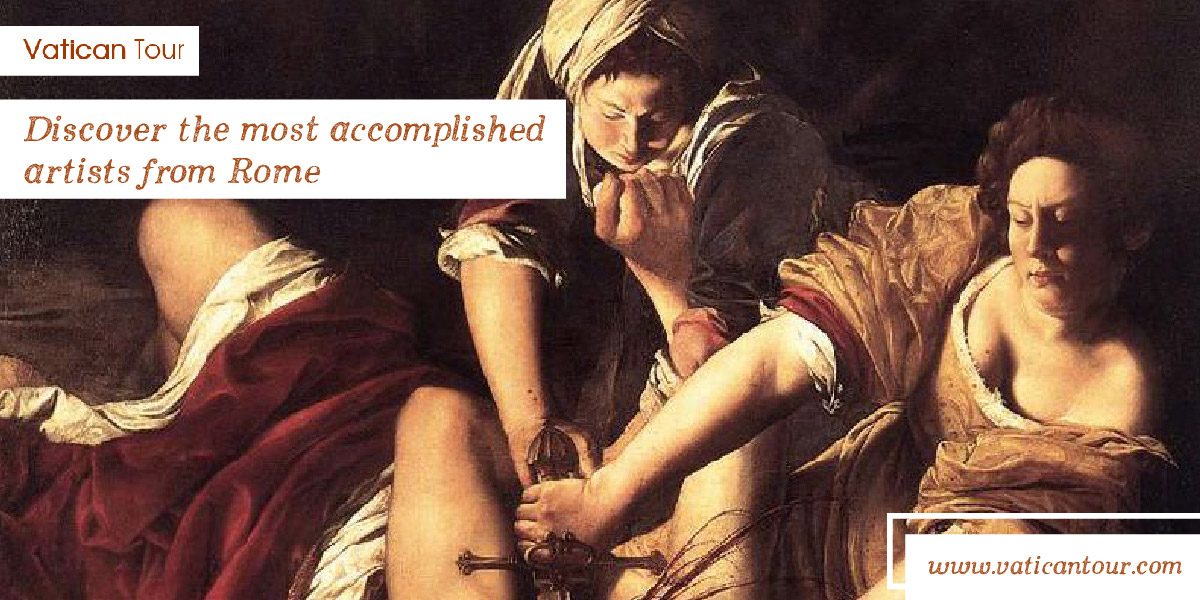 Rome is a city of art and culture. It is the city where the greats like Michelangelo and Bernini flourished as painters and sculptors. But they were not originally from Rome. Below we pay tribute to those masters and artists who were born in the Eternal City.

With semi-private Vatican tours, you can witness in person the incredible works of art by the many painters and sculptors of Rome. There are the few names you must remember.

Gentileschi was raped at the tender age of 18 by her art tutor, who had been appointed by her father. However, after a prolonged trial, the alleged rapist was let off with a delayed one-year sentence.

The incident affected Gentileschi and spurred her on to paint strong women characters from Biblical texts. Her most famous work is Judith Slaying Holofernes. It is said the painting depicts Gentileschi’s revenge on her violator.

With noted artists like Raphael and Michelangelo celebrated throughout the world as artists of high calibre, many of Rome’s own sons get overshadowed. One such example is Antoniazzo Romano, an artist born in Rome.

Romano was a distinguished figure among the early Renaissance artists with a wide range of scintillating artworks like the Virgin and Child with Saints in Reiti and even decorations in the  Vatican Palace which were entrusted to the artist in the 1470s.

His most famous artwork is the Annunciation that can be viewed at the Church of Santa Maria Sopra Minerva. It is near the neighbourhood where he was born.

Baglione was a competent painter of his time, though he is best known for his disputes with the famous artist Caravaggio.

His art pieces, which successfully display the chiaroscuro style, can be found in the Borghese Gallery. He is the author of ‘The Lives of Painters, Sculptors, Architects and Engravers’, a text which is read by art historians to this day.

Romano was initially a pupil of Raphael’s. However, after the death of the great Renaissance painter, Romano inherited the right to be in charge of Raphael’s art studio.

He continued with the unfinished works at the studio, including Villa Madama and the frescoes of the Vatican, like the Transfiguration. His most famous and celebrated art pieces, however, are the frescoes in Mantua, Lombardy and the Palazzo del Te.

Best known for his architectural marvel, the Trevi Fountain, Nicola Salvi has had an everlasting impact on the people of Rome. The fountain is an awe inspiring structure in the Roman cityscape. Standing proudly as one of Rome’s very own creations, the tours of the Trevi fountain is now an unmissable activity for the tourists the world over.

Sadly, Salvi died in 1751 before it was completed. Eleven years later the structure was finished by his friend, Pietro Bracci, when he sculpted the figure of Oceanus in 1762. With our Vatican Tours you can experience the exquisite grandeur of this magnificent edifice. This is but a small introduction to Rome’s native artists. So, the next time you are in Rome, enjoy the works of all the well-known painters and sculptors  but remember to pay homage to these local leaders of Rome’s art world.