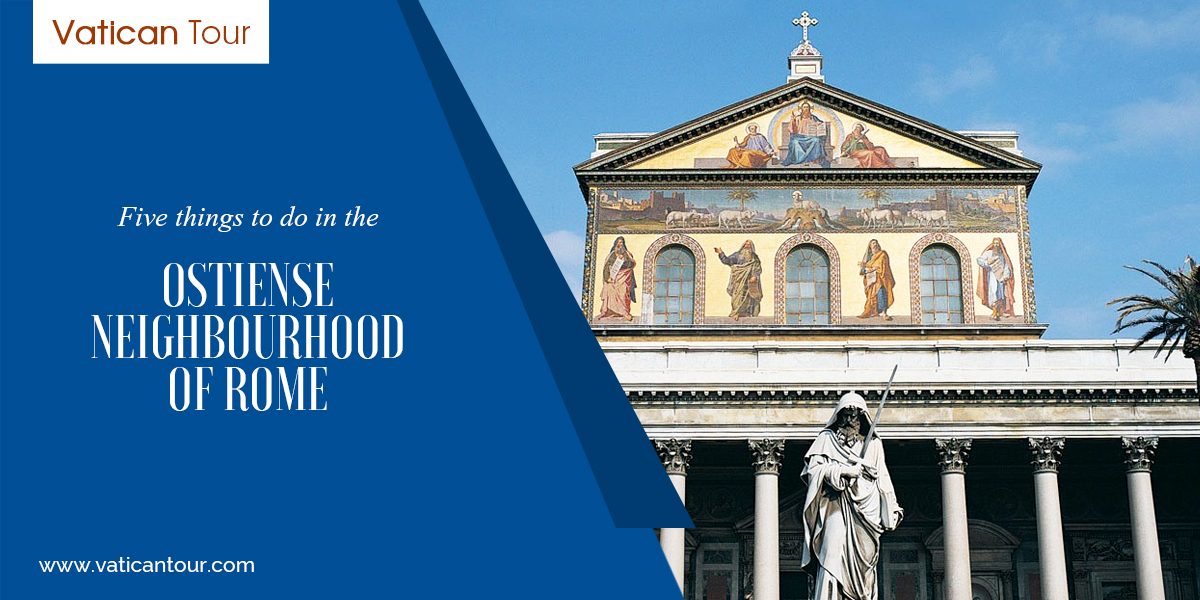 Ostiense district, in South Rome, has of late turned into an artist’s paradise with its industrial buildings doubling up as a canvas for contemporary artists. Several restaurants and bars have also opened up making the neighborhood a perfect place to spend your evenings. With Vatican city tours, you can be apart of the lovely social gatherings taking place in Ostiense the next time you are in Rome.

One of Rome’s hidden and lesser-known treasures, the Pyramid of Cestius is a 2000-year-old tomb built for Caius Cestius. Cestius was a powerful Roman magistrate, and a member of the Epulones, a group of priests who readied the food for the gods.

The pyramid is 36 meters tall and entry into the vaulted tomb can be gained through prior reservations made online. There is a cat sanctuary on the premises of the monument as well.

When the monument was included within the Aurelian Walls, it came to mark the northern boundary of Ostiense. Do not miss the opportunity of visiting this marble wonder.

Marvel at the 27 faces painted by Blu

A mesmerizing work of street art, the enormous and sprawling canvas featuring 27 faces on what used to be military barracks on Via del Porto Fluviale, is worth stopping by. Painted by street artist Blu in 2014, the mural has windows for eyes. Moreover, theart-work has become a rallying point for locals, artists and tourists alike.

Eat out at Eataly

Started in 2012 in the old terminal of the Ostiense train station, Eataly is a foodie’s paradise, stocked with gastronomical delights sourced from all across Italy. You can lay your hands on delectable items like Alpine Fontina cheese or hot Pugliese olive oil or even sweet Sicilian cannoli. You name it, Eataly has it.

Besides being a great gourmet shopping destination, Eataly serves as a one-stop food joint for hungry shoppers and tourists because it has restaurants serving amazing dishes at mid-range prices.

The sheer beauty of the grand monument will leave you speechless. You can pray or simply spend time on the peaceful premises, taking in the sun and the surroundings. In fact, the Basilica grounds are popular with Romans and tourists, young and old, serving as a common meeting place.

The Porta San Paolo is one of the few gates of the 3rd century Aurelian Walls that is still standing. In the old days, the Porta stood as the beginning of the roadway connecting Rome with Ostia. But today, it serves as the entrance to the Via Ostiense Museum that exhibits prints and documentation related to the famous road. The museum is open everyday to visitors.

Do not hesitate to reserve a bicycle or scooter and embark on an amazing tour of this unique neighbourhood of Rome. You can sign up for the Vatican Tours, best family tours in Rome and make your trip even more special.