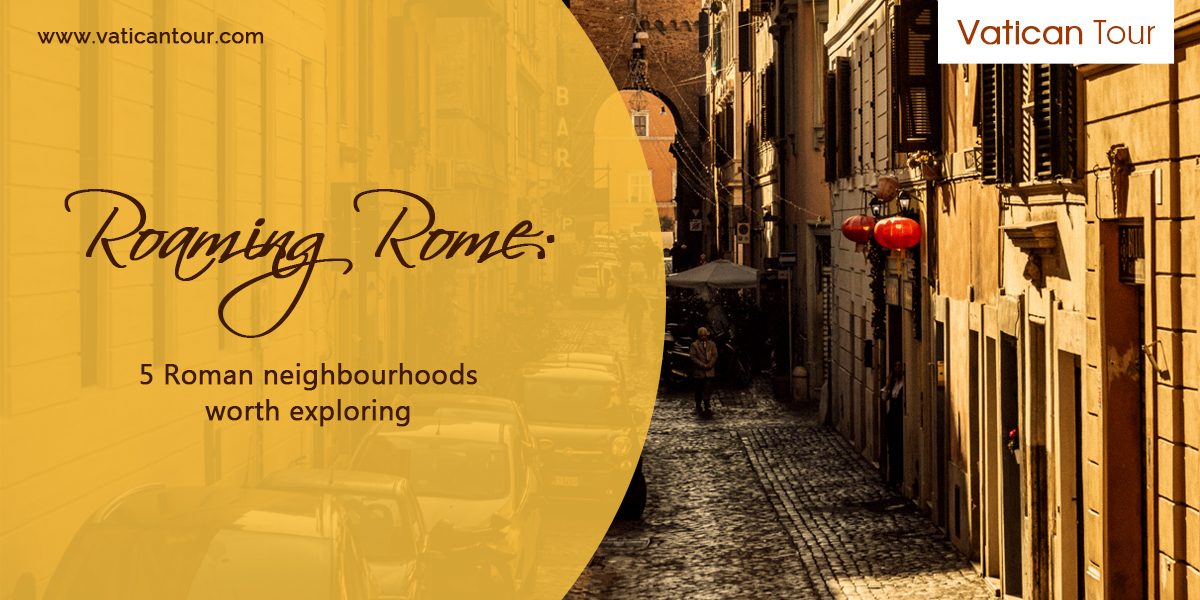 “Rome wasn’t built in a day,” the famous saying goes. With over 2000 years of historicity behind it, Rome is a compelling city of historical monuments, grand churches, and elaborate neighbourhoods.

The neighbourhoods of the Eternal City define its cosmopolitan character, and bear testimony to the richness of its cultural heritage. With the best Vatican city tours, you can partake of this rich heritage. Till then, read on to know more about the finest Roman neighbourhoods.

Trastevere, which roughly translates to “across the Tiber”, is an extremely beautiful neighbourhood in Rome. It is especially popular among university students and tourists who flock here forits fantastic range of eateries and bars.

Situated at the base of the Janiculum Hill, this neighbourhood is home to one of the Eternal City’s oldest church’s in Piazza di Santa Maria in Trastevere. And it is advisable to put on your walking shoes when touring Trastevere; it is a rich web of cobblestoned lanes and by-lanes you can walk through.

Monti is one of the oldest, centrally located neighbourhoods in Rome and its claim to fame is the fact that it is home to the grand Colosseum. The ancient amphitheatre is a wonder of the world, and it attracts tourists all year round.

With Vatican & Colosseum Tour, you can visit this ancient wonder and be awestruck by its magnificence. Also, do not forget to visit Trajan’s market and Trajan’s Forum, an ancientversion of today’s shopping malls.

The fashionable Testaccio is situated south of the famous Aventine Hill and stretches eastwards to the Pyramid of Cestius, the only pyramid in Rome. If you are inquisitive, you will surely visit the pyramid, which was recently opened to the public.

The Protestant Cemetery just next to it is where the famous English Romantic poets Percy Bysshe Shelley and John Keats are buried. The city’s old slaughterhouse, which was up and running three decades ago, birthed classic Roman cuisine and today Testaccio boasts of a wealth of amazing restaurants and the city’s most sumptuous pizzas.

This affluent and historic neighbourhood is one of the Eternal City’s plushest areas. Prati, the name translates to “meadows”, was a marshland in the past. Inhabited by the rich and the well-to-do in Rome, Prati is a tourist’s dream when it comes to shopping.

Here, you can, after shopping at the boulevard of Via Cola di Rienzo, head to the Castel Sant’Angelo museum. You can also visit the SacroCuore del Suffragio, the neo-Gothic church that houses the humble museum of the Souls of Purgatory.

Start your day by visiting the Basilica San Paolo Fuori le Mura and spend time on its peaceful premises. Also, you can enjoy marvelling at the street art on the industrial buildings dotting this neighbourhood.

The Pyramid of Cestius is a must visit if you happen to skip visiting the Testaccio district. And do not forget to eat out at Eataly and shop for fresh foods there.

Before heading out to roam about in Rome, do make a list of the neighbourhoods you want to visit and plan accordingly. Do not forget to carry a little cash with you for you might need it at places that do not accept cards. And do a little research about the cultural etiquette around visits to Rome’s historical monuments.