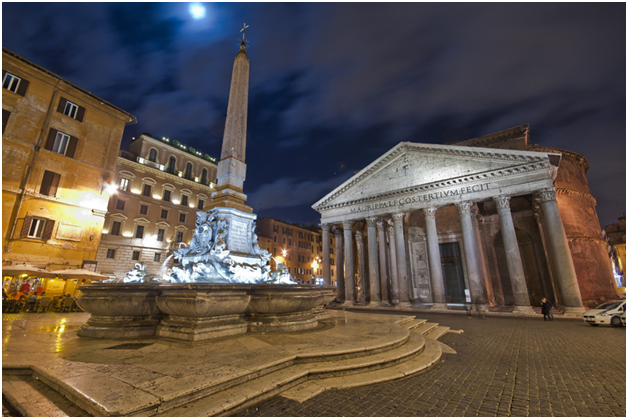 If you are visiting Rome then there is no doubt that you are going to visit one of our favourite monuments; the Pantheon. First of all, we would like to note that the Pantheon (Rome, Italy) is very different from the Parthenon (Athens, Greece). With that said, let’s have a closer look at what makes this grand temple so special.

The Pantheon today is one of the most well preserved Ancient sites in Rome. When you have the chance to stand in front of it, then enter into its amazing hall, it is hard not to wonder how it survived the ravages of time so well, when other monuments were reduced to ruins.

And this is one of many mysteries that surround this temple which we are going to go over today.

The origin:  This ancient monument was originally built as a pagan temple, the origin of which could be traced back to 27 BC. However, the Pantheon that we get to marvel at now is not the first Pantheon to be built. The first building got destroyed around 80 A.D. in a fire, it was rebuilt, but would not survive for long as it again was destroyed in 110 A.D. This current version was rebuilt in emperor Hadrian’s era in around 126AD still standing the way we see it today.

Unfortunately the lack of documentation makes it impossible to know everything about this holy structure, there is still plenty we can examine as humans have been in awe, and studying this monument for thousands of years.  The name ‘Pantheon’ owes its origin to the Greek language where ‘pan’ denotes ‘all’ and ‘theos’ refers to ‘all gods’. And with this name we know that the Pantheon was a pagan temple dedicated to all gods. What exactly happened in the temple is still a mystery waiting to be solved.

In the 7th century, the Pantheon was no longer a temple for all of the gods, as it was converted into a christian church and has since been officially named Basilica di Santa Maria ad Martyres (Basilica of St. Mary and the Martyrs). This conversion was the Pantheon’s saving grace as it was now a Christian temple and needed to be preserved.

The construction: This is one construction that has left historians and architects gaping in awe, mainly  because of the famous spherical dome, along with its oculus, or, the eye of the Pantheon which is the open air hole in the center of the dome. Although mere bricks and concrete were the materials used for the construction, its architectural brilliance continued to puzzle, inspire generations of architects and common beholders. This dome is still today the worlds’ largest unreinforced concrete dome in the world.

From the geometric patterns to the Corinthian columns that were imported from Egypt, the construction boasts of many intriguing features. The design further surprises, with a dome weighing in at 4535 tonnes the structure cannot support windows so the only natural source of light comes through the oculus. As hole is open air, the inside of the Pantheon is open to the elements so when it rains, it pours through the oculus of the Pantheon. However, with clever engineering, the weather has not affected the structure of the Pantheon due to the well concealed holes in the floor which are used to drain any water and humidity. For someone to have come up with these designs almost 2000 years ago is simply genius.

The Pantheon has also served as the burial place for royals, as it holds the tomb of King Victor Emanuele II, King Umberto I, amongst others. The illustrious painter Raphael is also buried inside the Pantheon.

What to expect:  The Pantheon with all its wonders and mysteries await you in the eternal city. We suggest avoiding a mid day visit so try to arrive in the morning, or in the afternoon so you can take your time to appreciate this ageless beauty. Stand in front of the portico, take a look at the columns and when you are done surveying, it is time to go inside and have a good look at the massive dome, check out the oculus and wonder what inspired the genius who engineered this marvel in that ancient age. When you are standing directly below the oculus, look down at the floor to see if you can find the drainage holes in the marble. Look at the beautiful art, the tombs and just try to imagine what the ancient Pagan temple was like in its heyday, which divine beings were worshipped here.

Rome with all its glory will never cease to surprise you but it’s always best to visit with a guide. We tour the Pantheon on our Dolce Vita Tour so if you are looking for special offers on pantheon tours then book one of our Vatican Tours and claim your second tour discount. The inspiration that runs through the very structure of the building is a clear indicator of the magnificence and opulence the eternal city was synonymous with.

Pack your bags and come join us on the trip of a lifetime in Rome.