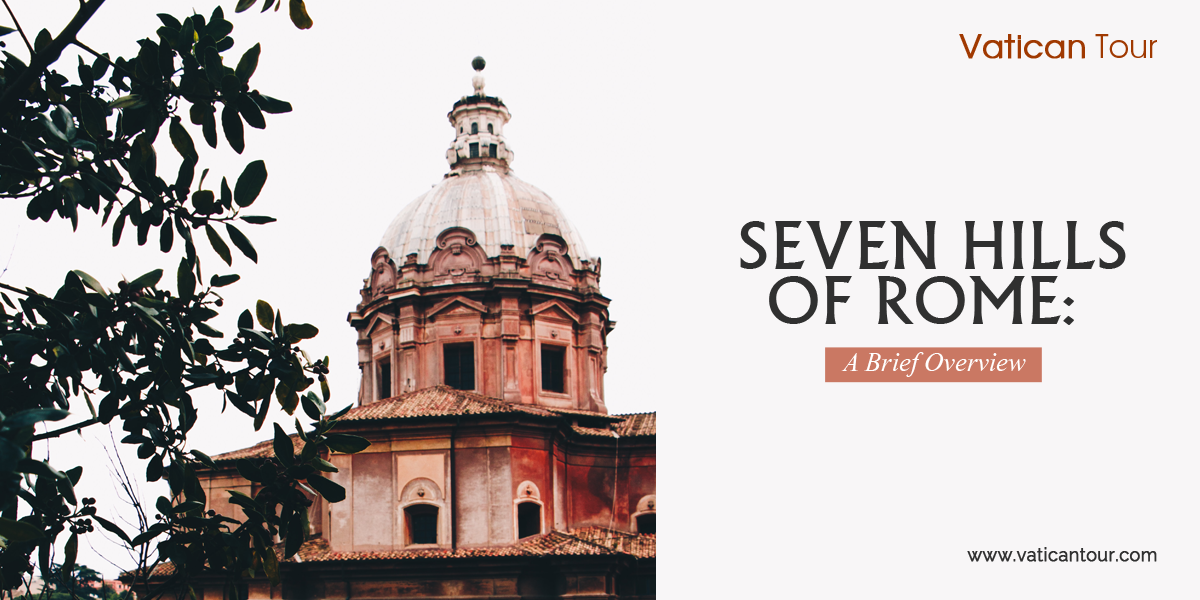 Geographically, Rome sits atop seven hills: Palatine, Capitoline, Aventine, Caelian, Esquiline, Quirinal, and Vimina Hill. They once formed the fulcrum of the great Roman Empire. Read on to gain some insights about what makes each hill distinctive and their relevance to contemporary Rome. For a wholesome experience, sign up for the best Vatican city tours today.

The most famous of the seven hills, the Palatine is believed to be the site where Romulus killed his brother Remus and founded ancient Rome. Romulus became the first ruler of Rome and initiated a system of government that soon became the supreme power of the medieval Western World.

Today, much of the hill remains unexcavated; take a tour around the iconic ruins of the House of Augustus, the Flavian Palace and the Stadium of Domitian and appreciate the grandeur of the imperial buildings. For a wholesome experience, contact Vatican Tours today.

Originally known as Mons Saturnius, the Capitoline Hill held much political and religious significance during the legendary, ancient period. It was located inside the ancient Servian Wall the city walls in between the Forum and the Campus Martius. The early Romans used it as a citadel and the Temple of Jupiter, the largest ancient Roman temple, was situated right on this hill.

The key highlight, however, is the Capitoline Museums that contains famous Renaissance works of art as well as marble and bronze statues from the erstwhile era.

Replete with awe-inspiring monasteries, important churches and tranquil green patches, the Aventine Hill is the most picturesque of all the majestic hills of Rome. It is quiet and atmospheric. A walk through its quaint residential area is highly recommended. Also, don’t miss admiring the church of Santa Sabina and the Keyhole of the Knights of Malta. Peep into the keyhole to see one of the most incredible views of the dome of St. Peter’s, then take a walk through the Orange Garden at sunset.

Caelian Hill was a gorgeous, upscale residential neighbourhood during the Republic era. Wealthy Roman families used to live here.  Evidence of impeccably decorated mansions has been found beneath the imposing ruins of the Baths of Caracalla. There are several remarkable churches in the area as well. Santo Stefano Rotondo, Basilica di San Clemente and Basilica dei Santi Quattro Coronati are the most popular ones.

After indulging in an encompassing Vatican & Colosseum Tour, make sure you visit the Caelian Hill. The Villa Celimontana and its verdant gardens await you.

The largest of Rome’s seven hills, the Esquiline shot to fame for being the site of Emperor Nero’s Golden House (Domus Aurea). It is believed to be the grandest villa ever built throughout the history of Roman civilization spanning through the Palatine to the Caelian Hill. Though excavations are still taking place, you can marvel at the exquisite stucco ceilings and frescoes on weekends. Otherwise, you can visit the Papal Basilica of Santa Maria Maggiore in the vicinity. It is the biggest church devoted to the Virgin Mary in the whole of Rome.

The northernmost of all the hills, the Quirinal is the official residence of the president of Italy, who lives inside the Palazzo del Quirinale. Interestingly, the palace was once the residence of the Pope as well and housed several political dignitaries over the years, including four Italian kings, 30 Popes and 12 presidents of the Italian Republic. Besides, there are numerous beautiful baroque churches and monuments in the area, such as Sant’Andrea al Quirinale, San Carlo alle Quattro Fontane and the Quattro Fontane. They are worth exploring.

Lastly, the smallest of the seven hills, the Viminal is noteworthy for being the site of Rome’s famous Termini Station, the Palazzo Massimo and the Teatro dell’Opera. Two out of four National Museums of Rome are located here. Also, you get to visit the ruins of the thermae Diocletiani (Baths of Diocletian) situated towards the northeast of the hill. Originally, they were the biggest baths of imperial Rome.