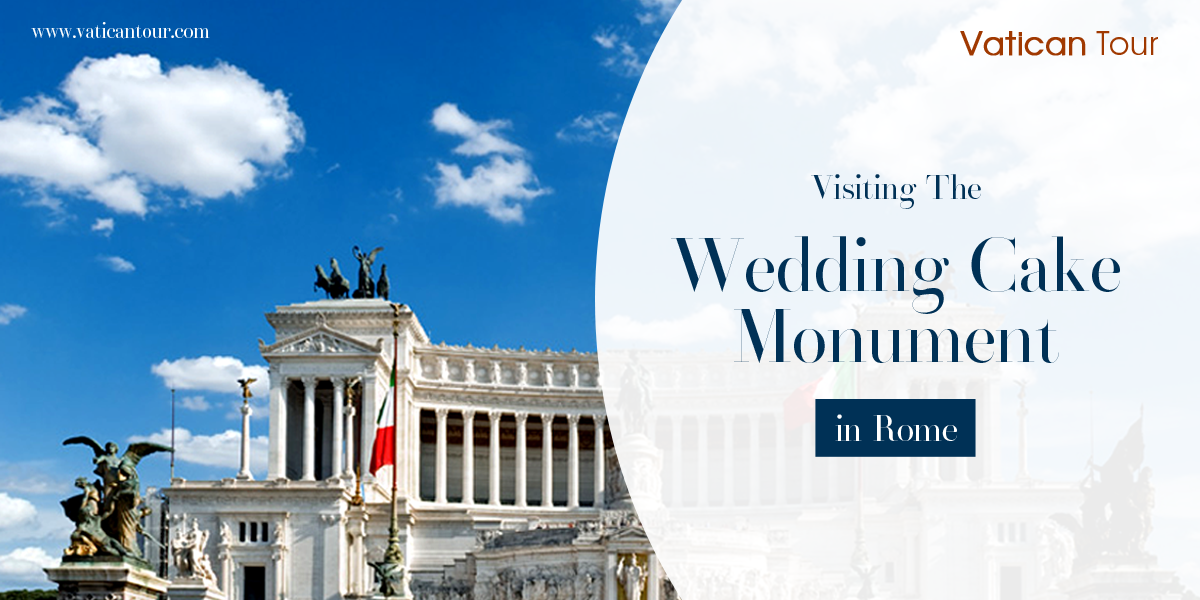 Il Vittoriano on Piazza Venezia is one of the most spectacular and easiest to spot among all the monumental architecture dotting Rome’s landscape. Built with dazzling white marble in honour of the first king of Unified Italy,Victor Emmanuel II, this colossal structure radiates power and dominance. Owing to its central location on Piazza Venezia, which is a large and busy square at the heart of the city, tourists are likely to cross this monument at some point on a trip to Rome and be awestruck by its lavishness. To explore the monument in all its glory, sign up for the tours of the Vatican today.

Over the years this giant, white monument has earned many peculiar nicknames, like ‘’Wedding Cake’’ and ‘’typewriter’’. While its similarity to a wedding cake is evident immediately, other not-so-obvious nicknames hint at a mocking attitude, which probably stems frompublic disagreement regarding the construction of the monument. Il Vittoriano’s striking aesthetics is in sharp contrast to the understated elegance of the medieval Roman architecture surrounding it. Moreover, many prominent antiquities and churches were pulled down to allow room for a monument that many natives think is ‘’too flashy’’, ‘’too pompous’’ or ‘’too white’’ for the subdued colour tones of the setting.

Significance of the Landmark Monument:

Il Vittoriano has powerful symbolic value; it represents the values of unity and freedom that the Italian unification promoted. Its design, which began in 1885, was entrusted to Giovanni Sacconi, a young and motivated architect who was chosen through a public competition.However, it’s inauguration in 1911 by renowned personalities of the state happened after the designer’s death.

Time and again,Il Vittoriano has been associated with fascism as Mussolini organized military parades and delivered speeches on this site. That’s why, after the fall of the fascist regime, the monument went through a period of negligence and was subsequently closed to the public because of a terrorist attack.Forty years later, it reopened in 2000 after renovations and is currently a popular place for exhibitions and enjoying some of the finest panoramas of Rome.

At first glance, there are plenty of impressive features to take in – the enormous bronze statue of King Vittorio Emmanuel II, the fountains, Corinthian columns and the captivating sculpture of the Goddess of Rome before a gold mosaic backdrop. Right below this figure is the memorial of the Unknown Soldier that commemorates any Italian soldier who died in the battles of World War I. Established is 1921;the tomb is always adorned with an eternal flame and large wreaths.

The inside of the monument is as ornately adorned as the exterior and there is a splendid museum you can explore. A not-to-miss experience at Il Vittoriano is visiting the terrace via the amazing glass-walled elevator, known as Rome from the Sky. The terrace offers beautiful views studded with domes, rotundas, rooftops and renowned ruins like the Colosseum and St. Peter’s Basilica. There’s also a cafe where you can relax for a few hours amid gorgeous vistas of the ancient capital.

Il Vittoriano is a significant part of Rome; yet exploring the monument only covers a tiny portion of the city’s rich and diverse history. Take a comprehensive excursion into Rome’ senchanting past by opting for Vatican and Colosseum tours. Booking with Vatican Tours allows you to enjoy the tours at ‘’your own pace’’ and services of professional English Speaking Guides who have excellent knowledge about Rome and wonderful storytelling skills.