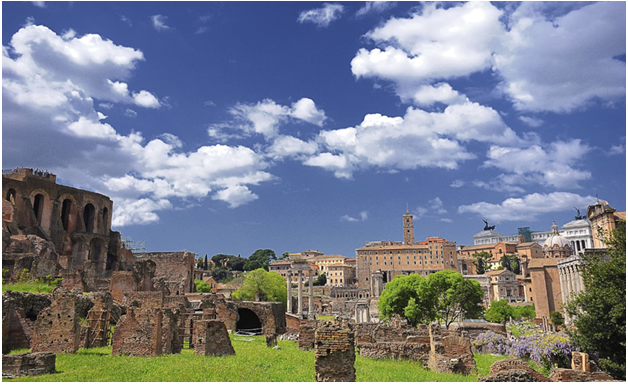 The city of Rome sparkles with so many ancient wonders that one single trip would not be enough to uncover their secrets. The Foro Romano, or, which is universally popular as the Roman Forum is steeped in history. This is why we always suggest a Tour of the Colosseum and Roman Forum so you can delve deeper into its amazing past. The Roman Forum used to be a melting pot of religion, politics, social and commercial activities. The ancient temples, structures and ruins are well worth a visit any day as they all have intriguing tales to tell. So, before you pack your bags, pause and learn about some of the magnificent temples that dotted this place when it throbbed with bustling lives.

The temple ruins that are found in the forum are relics of a past when these mighty monuments were constructed not only for gods but also for mighty men. Let us explore some of the most iconic ones.

The Temple of Vesta: Welcome to the temple of Vesta, that was the home to the sacred fire which the six Vestals guarded. Vesta was the goddess of the home, family, and health, and the sacred fire was the symbol of the safety of the Romans along with their prosperity. The temple was circular in shape as opposed to the rectangular constructional style of that era. An interesting fact about this temple is, it used to be a storage of valuable documents like wills.

The Temple of Saturn: This magnificent temple was built around 497 B.C., in dedication to Saturn, who was the god of agriculture. It happens to be the oldest temple in the Forum and there is an interesting fact about this temple that you should know, this temple was also used as a bank or, a treasury, where the wealth of Rome was kept. This temple got rebuilt again and again, as it was gutted by fire a couple of times. However, now only the iconic 8 columns stand bearing the traces of the past glory.

The Temple of Venus and Rome: This temple was built by Emperor Hadrian, and was dedicated to Venus Felix and Roma Aeterna. The former brought about good fortune, and the latter symbolized Eternal Rome. Apart from being one of the largest temples in the Forum, it had a magnificent design and contained statues of Venus Felix and Roma Aeterna. The temple got destroyed during the 9th century due to an earthquake.

The Temple of Romulus: This temple was another monument constructed with the purpose of deification. This time around it was built in memory of Romulus, who was the son of Maxentius, and died at a young age. This circular temple was built around A.D. 307, however, this Romulus was not the founder of Rome, about whom we read in the myths. Today it is better known as the ‘Basilica Santi Cosma e Damiano’, as it has since been transformed into a Catholic church.

So, those were some of the legendary temples the Roman Forum proudly housed, now only the ruins of these magnificent constructions remain. The Roman Forum is one of the most important archaeological sites in the western world and it is fun for the whole family to visit so if you are looking for the best family tours in Rome, then a visit to these sites should be high on your list.