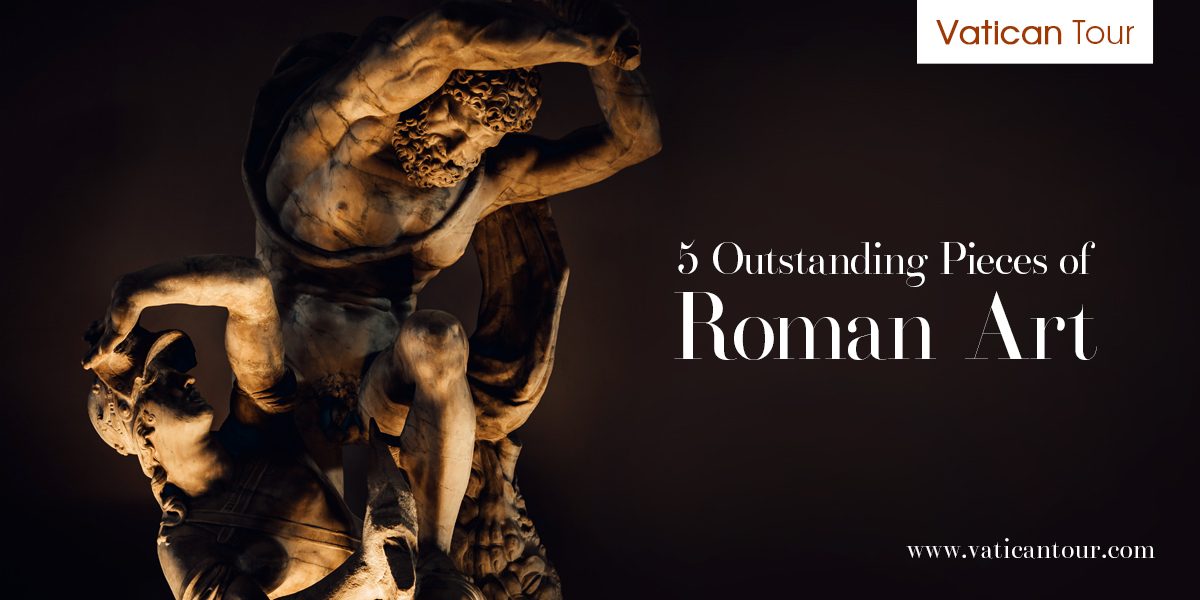 Rome is synonymous with art and vice versa. It is one of those cities that takes pride in its artistic and architectural feats.

You must have already heard of the grand Colosseum, the mesmerizing museums of Vatican City, and the city’s fantastic range of fountains, all of which speak to the richness of Roman art. If that sounds inviting, then book Vatican Tours right now to learn about each of these more closely.

Art is present in its varied and most beautiful forms in Rome. Every road and cobblestone street, all of its neighborhoods and eateries,are flushed with art. So, let’s celebrate art in Rome because according to Francesco Petrarca, “A fool is one who admires other cities without visiting Rome.”

5 Works of Art in Rome You Must See

If you are planning for the best family tours in Rome, then you must not miss out on the unique assemblage of the artistic masterpieces that the Eternal City had preserved so carefully throughout the ages.

Here’s a handbook of 5 of the most astonishing pieces of Roman art:

Raphael’s name appears alongside two of the most famous figures of the High Renaissance – Leonardo da Vinci and Michelangelo. Though you can find works by this renowned artist throughout the city, Villa Farnesinahouses the best of his creations.

The villa was built for AgostinoChigi, Pope Julius II’s treasurer, who commissioned none other than Raphael to paint frescoes on the ceiling and the ground floor of the palatial establishment. The famous Cupid and Psyche and the Triumph of Galatea are some of the notable artworks you will find here.

The Amazing Apollo and Daphne by Bernini

Gian Lorenzo Bernini: An Architect Who Sculpted The Very Idea Of Rome, is a household name in and around Italy and not unknown to the world.

Among all of Bernini’s artistic glories, Apollo and Daphne deserve a special mention. Galleria Borghese is home to the life-sized marble sculpture that will leave you in awe: Apollo, trying to grab hold of Daphne just as her father has started transforming her into a laurel tree. The artist was only 24 when he completed it.

The Paintings of Contarelli Chapel by Caravaggio

The tradition of Baroque art is recognized the world over, and Caravaggio is one of the foremost painters of the genre.

The artist is known for a great many paintings, his unique chiaroscuro technique that can be found in many of his masterpieces. However, the Contarelli Chapel in San Luigi deiFrancesi Church is one of a kind for admirers of Caravaggio and art lovers across the globe. The chapel houses three of his remarkable works – The Calling of St. Matthew, The Inspiration of St. Matthew and The Martyrdom of St. Matthew.

Vatican City indeed presents a treasure of Michelangelo’s masterpieces, but you cannot miss Moses for anything else. The impeccable statue lies inside the Basilica di San Pietro in Vincoli, proudly perched as the prime attraction of the tomb. So, reach out to the Vatican city tours for a promising venture.

Sarcophagus of the Spouses

Of course, Rome is replete with ruins dating back to the well-known Roman Empire, but did you know that the city also boasts of artifacts that predate even this? The Etruscan sarcophagus is one of such objects and gives us insight into the  art of a civilization that once flourished within the Roman territories.

You can discover the enthralling, ancient art of the Etruscans at the National Etruscan Museum of Villa Giulia. The sarcophagus of the spouses carves the reclining figures of a married couple at a banquet. The Mosaics in Santa Maria of Trastevere and the extravagant Gallery of Mirrors inside the opulent Palazzo DoriaPamphilj, are some of other treasures you can discover with the special tours of the Vatican.