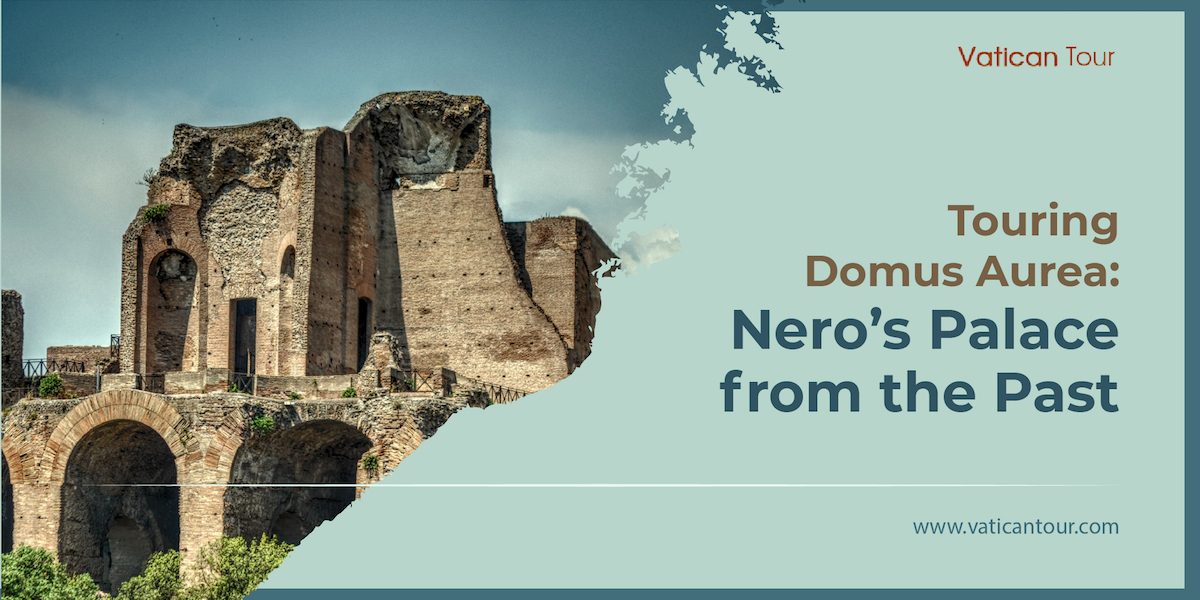 As you take out your tablet to plan your upcoming Rome itinerary and Vatican Tours, you undoubtedly put Trevi Fountain, Piazza Navona, Pantheon on the list, but, do set aside some time for another Roman relic, Domus Aurea; the once magnificent abode of the infamous Roman emperor Nero.

If you are wondering what makes this place so special then you need to dive into the mystery that surrounds it.

Domus Aurea: The mystery of the golden palace

At the mention of Rome, you immediately start thinking about architecture, the Catholic Church and their many churches and palaces, tours of the Vatican, and that infamous phrase “Nero Fiddled While Rome Burned”.

Almost everybody is familiar with this phrase along with the controversial story of Nero.

The Golden Palace he built was not only opulent befitting an emperor of his stature, but it was also mired in controversy, as it was rumored that an entire city was burned to the ground so that the emperor’s ambitious project Domus Aurea could take off.

There is no historical record to back this idea that he played any instrument as Rome went up in flames, but there were rumors that he practically did nothing to stop the infamous fire in 64 A.D. that continued to raze down the city for almost a week.

The past splendor of Domus Aurea

The construction of the Golden Palace began in 65 AD. It is also rumored that Colossus of Rhodes was an inspiration behind this extravagant construction.

It came complete with an artificial lake, waterfalls, along with several other features that dotted the landscape. The palace itself was decorated in gold leaves, gems, and mesmerizing frescos. The palace had close to 300 rooms or even more a long with a 30-meter long bronze statue of the emperor.

It was destroyed by his successors after his death. It was actually buried into the ground, until it was rediscovered in the 15th century.

Domus Aurea in the present

Domus Aurea may no longer be as extravagant as it used to be, but, even in its ruined state it still reminds you of the emperor who indulged in the pursuit of aesthetic pleasures and who perhaps watched as the city burned.

It was later excavated and the restoration work started, it took more than 20 years to restore the place. It was officially opened for tourists from 2007 onwards.

Domus Aurea what to expect now

It will be best to check the following like to ensure that this site will be open when you arrive as it is constantly under works.

The temperature here dips low and the humidity is high, so watch out in winter. Just be prepared in advance and dress accordingly especially if you are considering a winter visit. Summer is an ideal time as it will allow you to cool down, out of the scorching Roman sun. The visit does not take more than 75 minutes.

Now virtual reality is used to recreate the old charm of the golden palace envisioned by Nero so don’t miss out on that.

Explore the remains of the dining room, and other chambers as you walk through the ruins.

This place is easily reachable via bus, metro, train. Take LINEA B Metro or, Bus 51, 87, 85, 75, or 117 to Colosseo where it is just a short walk away. As you may guess from the name metro name ‘Colosseo’ it is right across from the Colosseum so a perfect activity to plan with your Tour of the Roman Forum and Colosseum.

Go for a guided tour

However, instead of venturing alone, go for a guided tour because most tourists complain about not be able to find the entrance and running in loops.

The guides are fluent in Italian, English, Spanish and French. So, you won’t face any problem. The golden aura of the infamous Domus Aurea might be lost in the pages of history, but, the remains of the palace still remind you of those defining moments in the history of Rome. Experience the ruthless ambition of a whimsical emperor, whose indifference made all the difference in the history. Do check this palace out with a combination of our Vatican museum tour as some artifacts from the palace are now on display in the Vatican.