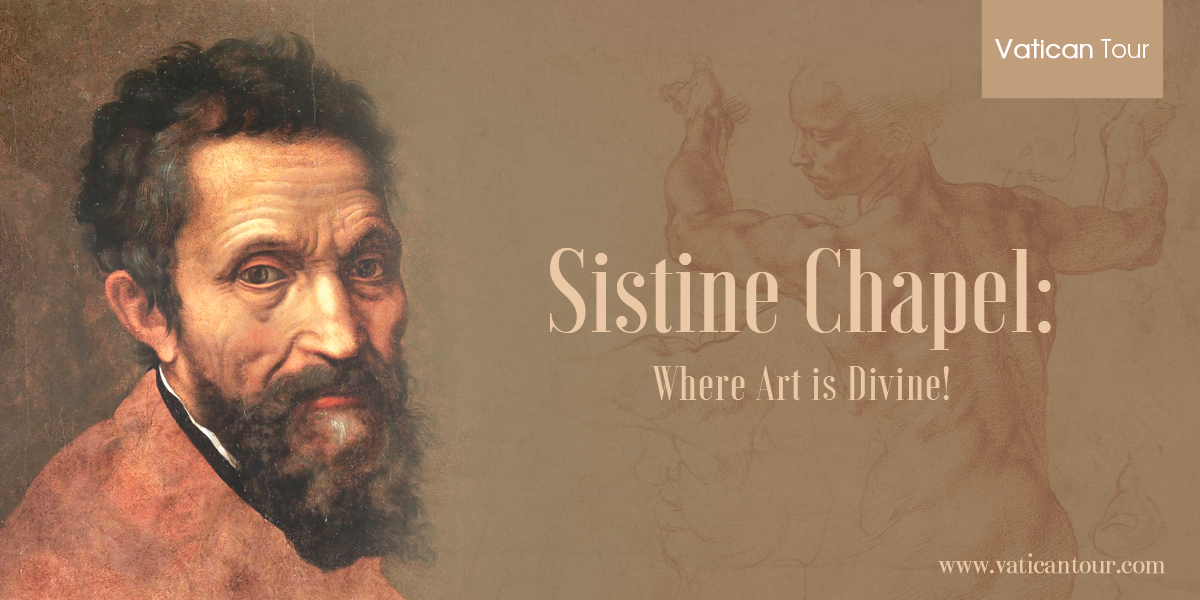 The Sistine Chapel also known as Cappella Sistina in Italian lies in the Vatican Palace. The name of the chapel is inspired from Pope Sixtus IV, who sanctioned the construction of this masterpiece.

Giovanni dei Dolci is the architect and the creator behind the Sistine Chapel, who built it between the years 1473-81 and since then, it has stood in all its splendour to be revered by thousands of pilgrims and connoisseurs of art. It is admired not only as an architectural wonder, but also for the incredible frescoes contributed by the great Renaissance maestro, Michelangelo.

Vatican Tours will guide you conveniently and comfortably in the pristine Sistine chapel, where religion blends with art.

Michelangelo, from a Sculptor to a Painter of Universal Repute!

Michelangelo was a gifted sculptor and soon came to be known as the most distinguished sculptor in all of Europe. But, who knew that the Sistine Chapel would feature his paintings and in turn make him famous as a painter.

In 1505 Pope Julius II went to St. Peters to see the Florentine artist’s spellbinding sculpture: Pieta. After seeing the monumental masterpiece he commissioned the valued sculptor to restore the walls and the vault of Sistine Chapel, which was built by Pope Sixtus IV, the uncle of Pope Julius II.

Soon after, Michelangelo would be acclaimed all over the world for his works in the interior of the Sistine Chapel.

The Sistine Chapel and its Interiors

Sistine Chapel is a rectangular structure built out of brick. It has six arched windows and a barrel-vaulted ceiling. Though the exterior of the chapel is quite drab, the interior satiate your artistic senses with the fascinating frescoes by some of the most sought after Florentine Renaissance masters.

The side-walls of the chapel are decorated with frescoes from 1481-83. There are six frescoes on the northern wall of the chapel which depict the life events of Jesus Christ.

Furthermore, there are six other frescoes on the south wall that illustrate the life of Moses. The frescoes were painted by these artists: Perugino, Pinturicchio, Botticelli, Domenico and Benedetto Ghirlandaio, Rosselli, Luca Signorelli, and Bartolomeo della Gatta.

When you are done perusing these works of art, you will find some smaller frescoes between the windows which are clear depictions of various popes. You will also find remove tapestries running down the side-walls; these take you through the events from the ‘Acts of the Apostles’. All of these were created by none other than the famous Raphael, who crafted them in 1515-19 in Brussels.

However, we can’t end our discussion on the Sistine Chapel without talking about the frescoes painted by the most celebrated artist, Michelangelo. On the ceiling of the Sistine chapel are illustrations of incidents and characters from the Old Testament which are simply beautiful. You will find another fresco on the altar wall, which is the world-renowned painting of, The Last Judgement. It is a mesmerizing and an artistic triumph.

The frescoes along with the paintings on the ceiling of the Sistine Chapel are some of the most enchanting artworks in the world. In fact, they are the pillars of Western art and culture. This is why you should include Vatican and Sistine Chapel Tours in your exploration of Rome.