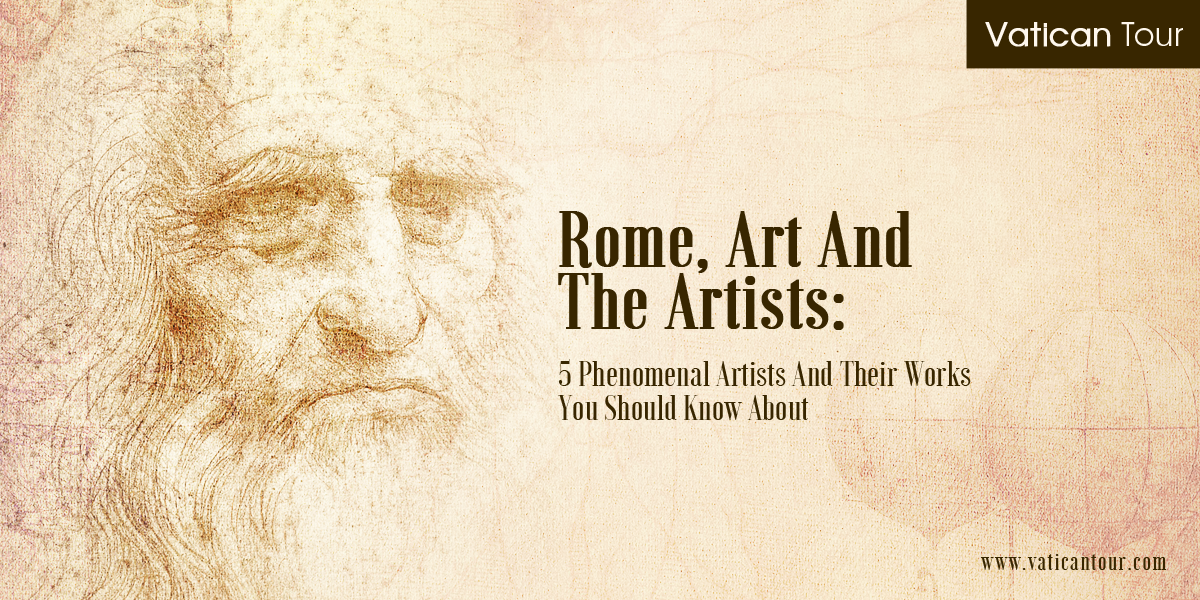 Rome, since ancient times, has been famous for nurturing artists. It is home to art that is composed, captivating and classical. You will take a trip through history as you admire the innumerable masterpieces held in the city.

You may already know some of the artistic masterpieces of Rome; you may even recall some of the notable painters. Go through this post to learn a bit about the 5 of the most noteworthy artists from Rome, who created priceless wonders that have been regarded throughout time and around the world.

Vatican and Sistine chapel tours will give you an even more in depth look at the artistic hubs of the Vatican and Rome.

Da Vinci was the polymath; if we don’t name him first it would be an injustice. Alive from 1452 to 1519, he was an outstanding painter. But Leonardo was also a person of endless knowledge in the fields of physics, botany, geology, philosophy and many others.

The style of Da Vinci speaks to sudden gradations of tone. He was also a master in capturing fleeting human emotions, which are visible in nearly all of his paintings.

If you are familiar with the Baroque style of painting, you should be familiar with Caravaggio. The paintings of Caravaggio are realistic, both from a physical and emotional point of view, human characters in action, in combination with dramatic lighting.

Caravaggio is known as the Father of the Baroque style of painting and served as an influence to many, including, Rubens, Rembrandt, Berniniand others. These artists are termed “Caravaggisti”, which draws upon the name of Caravaggio.

With the Byzantine style dominating the scene of art and architecture, Giotto was the first artist to break the tradition and, through his art, create a new wave of painting which was uniquely European and drawn entirely from life itself.

Rambling through his paintings you will certainly notice the accurate portrayal of human gestures, and he was arguably the first artist to do so.

Michelangelo is a constant whenever one speaks of famous artists and masterpieces. He is considered by most to be the greatest sculptor the world has seen.

Although he looked down on painting as an art form, that didn’t stop him going on to paint some of the most praised masterpieces in the world.

One can perhaps discover the core traits of the 16th century Venetian art in the works of Titian. He was a painter of immense attributes; he was comfortable painting portraits, landscapes, religious subjects and subjects pertaining to mythology.

In his paintings, the distinctive brush strokes and the touches of his fingertips are mesmerising.

Contact us and learn so much more with the best family tours in Rome that you can find.