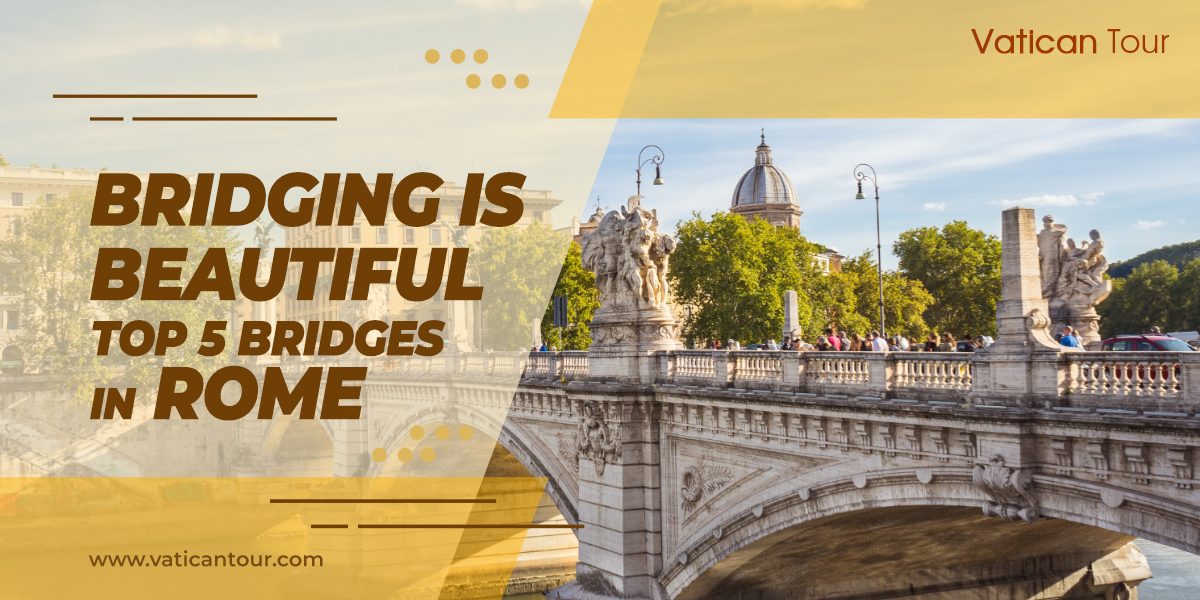 The third-longest river in Italy, The Tiber, flows through scenic valleys and meadows, crosses Rome, and then journeys into the Mediterranean Sea. Though only a short stretch of the Tiber flows through the Eternal City, governments over the ages have built numerous bridges across it, making Rome home to some of the grandest and oldest bridges in the world.

If you are planning to opt for an all-inclusive Vatican Tour, you might as well learn a little about the exquisite bridges you’ll encounter along the way.

Here, we list the top five bridges of Rome to help you plan your visit to the Eternal City with some of them on your itinerary.

One of many romantic and beautiful landmarks, this bridge gives you an unforgettable view of Rome. Dating back to 134 AD, this bridge connects Rome’s centre with the Castle Sant’ Angelo.

Legend says an angel was sighted on the bridge to declare the end of what was feared to be the plague. Pilgrims used the bridge to make their journey to St Peter’s Basilica in ancient times. However, sometime around the 15th century, Pope Clement VII levied a toll on those crossing the bridge. The income gathered went into the construction of statues representing two apostles.

This bridge connects the eastern half of the city with Tiber Island and is the oldest bridge in all of Rome, dating back to 62 BC. Named after the curator of the bridge at the time, Lucius Fabricius, this architectural feat sits a stone’s throw away from the Jewish Ghetto. It is, in fact, also known as the Jewish Bridge because of its proximity to the Jewish community’s famous centre.

The brick face and the two statues of Janus are recent additions to the bridge that otherwise stands in its original form, serving not only as a structure of utility to the Romans but as a tourist attraction as well.

Opened to the city’s people in 1911, just prior to the outbreak of the First World War, this bridge is one of the more recent structures to have been constructed in Rome. Spanning a distance of 108 meters, the bridge connects the Vatican City with the Corso Vittorio Emanuele. The bridge is decorated with two colossal bronze replicas of Victory at either end.

Historically significant for its connection with the Battle of the Milvian Bridge in 312 AD, this bridge is still a favourite among tourists and more so after the release of the Federico Moccia novel “I Want You”. A testimony to the movie’s popularity is the sea of locks clamped to the sides of the bridge, making it the ultimate expression of love for one’s beloved.

It was at the site of this bridge that Constantine defeated Maxentius in 312 AD, to make Christianity the predominant religion of the Roman Empire in one of the most important and pivotal battles in history.

Restricted to pedestrian use today because of its age, this bridge was commissioned by Pope Sixtus IV (1471-84) and is thereby, named after him. Built by architect BaccioPontelli over the remains of an older bridge, this piece of architecture connects the famous Campo de’ Fiori to the bustling Piazza Trilussa in the popular neighbourhood of Trastevere. The bridges mentioned on this list are must-visits for anyone travelling to the region for the best family tours in Rome. Though these bridges are largely used by the tourists for exhilarating walks and fantastic photo opportunities away from the bustle of the city, it is important to know that they have an immense role to play in the city’s history.