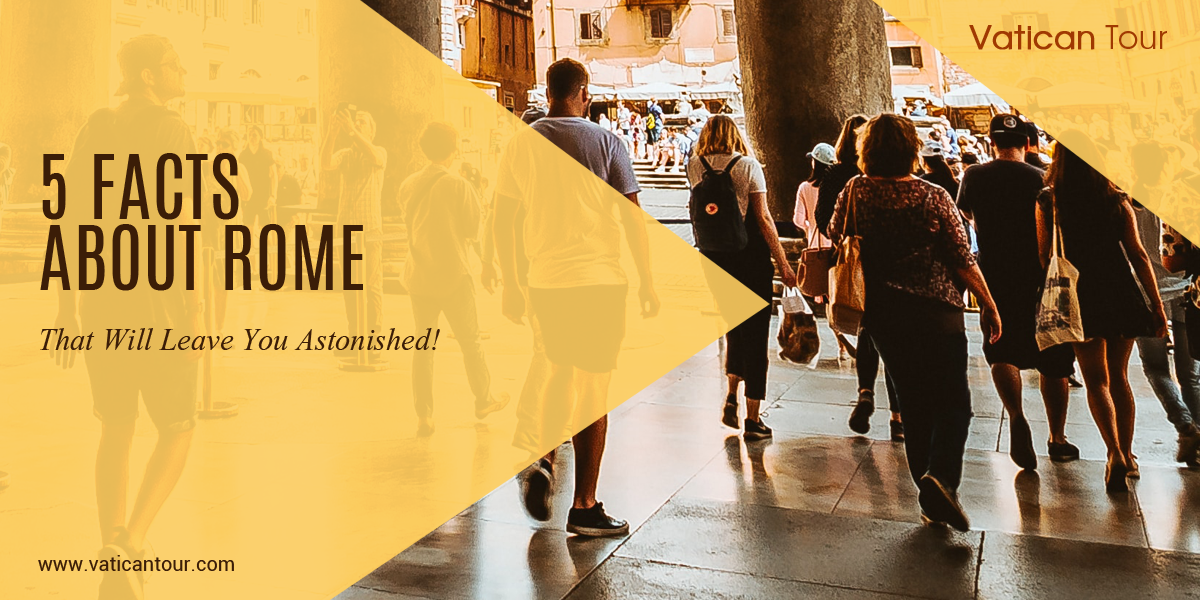 Rome, the capital of Italy and, undoubtedly, the capital of art and culture, is easily a dream destination. It is steeped in the glory of the yesteryear and a heritage going back 3000 years, while being home to globally renowned art, culture and architecture.

Did you know that a man named Romulus founded the city of Rome back in 753 BC? Roman legend has it that Romulus had a twin brother known as Remus. Their parents abandoned them in what is now Rome, and the baby boys were found and raised by a she-wolf. When they grew up, Romulus and Remus fought each other in a great battle. Remus was killed, making Romulus the first ruler of Rome and giving the city its name. Keep reading if you want to discover other intriguing facts about Rome.

Fights between Man and the Wild

The Colosseum will delight you with the splendour of its architecture that withstood the test of time; it was built as early as 72 A.D. It still attracts tourists from across the world by its name alone but rarely does one know about the gladiatorial fights that took place there once upon a time between man and various wild beasts which lead to the death of thousands just for amusement.

Animals like the North African elephants would still be here today, were they not engaged in the gladiatorial fights. Vatican & Colosseum Tour will reveal even more thrilling facts about the events that took place in the Colosseum.

The Vatican and its People

Perhaps you think of Vatican as a part of Italy or Rome. In that case, you’ve got it slightly wrong. To put it simply, Vatican is the world’s smallest country. The Vatican is a sovereign state that stands within the city limits of Rome.

You would be amazed to know that the Vatican is comprised of only 800 residents and even fewer citizens. One does not become a citizen by birth and, oddly, one’s citizenship ends once a person is longer a resident.

Another interesting fact: the Vatican Museums boasts of the largest art collection in the world.

Cappuccino, the Name and the Drink

Fancy a cappuccino? The drink is strictly a breakfast beverage to be enjoyed before 10 am according to Italian tradition.

Are you aware of the fact that the name of the beverage is derived from the order of the Capuchin monks, the bones of 4000 of whom decorate the Capuchin Crypt of Rome? The Capuchin Crypt in Rome hosts 5 chapels with a 60-meter long corridor. The name is also loosely associated with cappuccino, or the hoods of the monks, as the words sound alike in Italian.

The Birth of the Shopping Malls

Shopping malls are found everywhere now, but the first of them was built in Rome. The Roman Emperor Trajan built a building of several levels, having more than 150 outlets. This mall had everything from food, spices to clothes available for purchase.

Rome is a fascinating place that you can enjoy solo or, if you are looking for the best family tours in Rome, Vatican & Colosseum Tour are a rock-solid option.