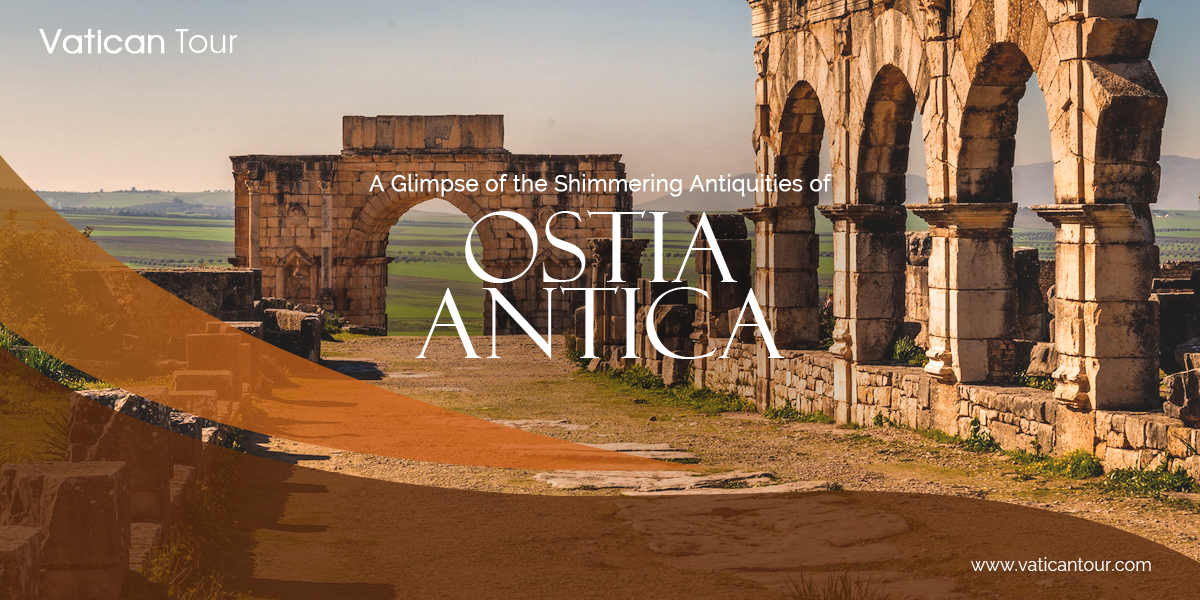 Pompeii is spectacular, but with the hordes of tourists all year round, you might find it too crowded to explore. Instead, check out Ostia Antica, which used to be the seaport of the city of Imperial Rome.

Situated at a 30 minutes drive from the Colosseum, Ostia Antica is really one of the most underrated places of Italy.

If you have ever dreamt of Pompeii without the crowds, then Ostia Antica is the place to be, with its echoes of antiquities and a prosperous past. You can easily venture there with our Vatican City tours and tickets to experience this scintillating city in its full glory.

About Ostia Antica and Its History

As you arrive to Ostia Antica, which is near the modern day town of Ostia, you will be spellbound glancing at the ruins of what used to be a flourishing commercial centre going back 2000 years.

The name Ostia comes from “os”, which means “mouth” in Latin. The name is highly significant because of the location of this place, which is right at the mouth of the river Tiber. Earlier, Ostia served as the Roman port, but due to heavy silting over the years, it now stands 3 kilometers away from the sea. It is open to the public with all its brilliantly preserved collection of ruins, thanks to the mud, which safeguards it from the wreckage of time.

What you can find in Ostia Antica

Ostia Antica is now an archaeological Roman site. One of things you will encounter is an open-air theatre, which has an impressive capacity of 6000 people. The first three rows of the sitting area were probably reserved for the most distinguished guests.

Completely built out of brick, this is one of the oldest theatres in the world and concerts are held within its confines even today. Interesting, isn’t it? Besides this, you can travel past acres of buildings, apartments, numerous temples, monuments, stupendous baths, and warehouses still kept intact.

Head to the Museum of Ostia

Take a tour around the small museum of Ostia teeming with the city’s biggest collection of statues of varying forms, ranging from rivaling wrestlers to kissing cupids to mirthful gods. The statues that the museum displays mostly dates back to 2nd and 3rd century AD and were highly influenced by the original Greek ones.

Apart from these, you will also be mesmerized by the painted busts of real Roman people, along with statues of various fathers and grand-fathers, which symbolize the high reverence that the Roman religion nurtured for the men of the families. You can also explore what is left of the fantastic frescoes that still decorate the walls of the living quarters.

Adjacent to the central theatre is the Guild Square boasting of Rome’s import/export industry of the bygone era. It comprises of nearly 60 offices of the ship owners and other traders. While walking around, you would sight numerous dilapidated mosaics, which still bears the name of the services the ancient Romans used to get from the corresponding shops.

The Baths of the Forum

The epic baths from the distant days with their luxurious marble steps still seem inviting as a place to lounge and bathe.

Interesting fact: the Romans predominantly used olive oil instead of the soaps of today for washing. Therefore, the waters were skimmed from time to time to ensure their cleanliness.

After you have seen the baths, be sure to find an elevated place from where you can overlook the Baths of Neptune. The splendid mosaic of Neptune riding four horses through the tumultuous waves is captivating.

Check out the House of Diana, also known as an insulae, a tenement complex of multiple stories which served as the living quarter for the lower middle-class, with our private tours of Rome for families. You will also find an inn nearby, known as the Insula of the Themopolium, which still houses a small sink and several shelves, which were used to showcase foods and drinks during the medieval times.

So, hurry and steal your deals from our Vatican Tours for an all-inclusive experience of Rome and the Vatican City.