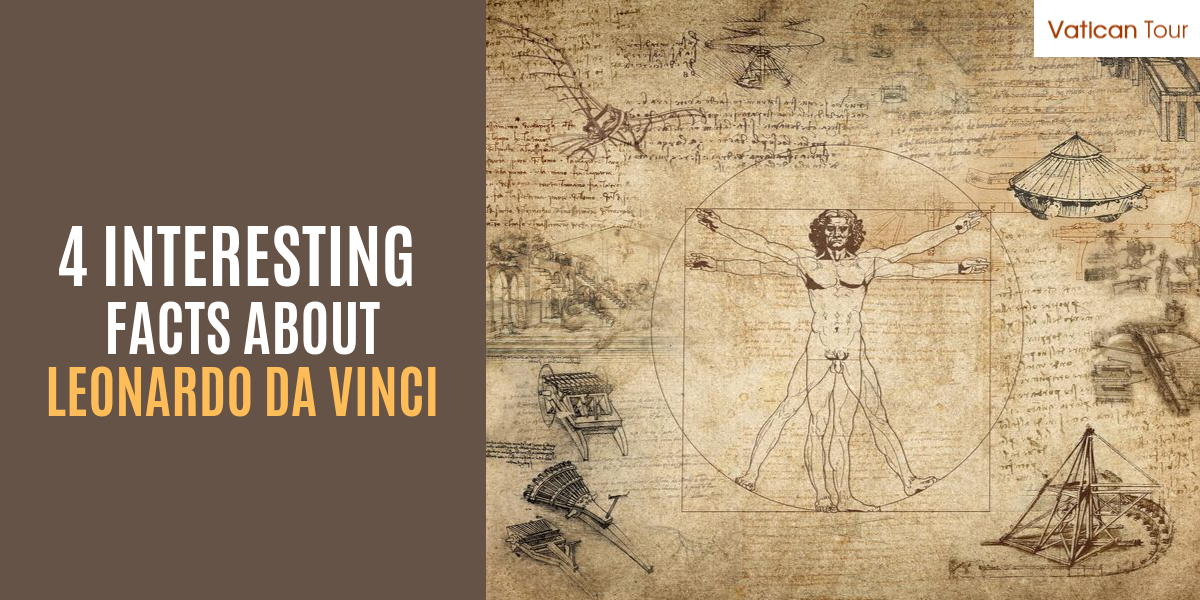 Sculptor, painter, musician, writer, inventor – Leonardo da Vinci is Italy’s ultimate Renaissance man. His artistic brilliance prevails today in riveting artworks, notebooks and paintings found across Italy and beyond. Unfortunately, we don’t have access to a lot of his finished works and his biographical details are scarce. However, below we’ve highlighted a few interesting facts about da Vinci, which somehow bursts the bubble of his monumental enigma and paints a subtle picture of his creative ingenuity.

Born as a ‘nobody’, Da Vinci was talented from the beginning…

Leonardo da Vinci was the illegitimate son of a reputed lawyer and a peasant woman. He spent his early years in the quaint town of Anchiano with his mother but eventually came to live with his father and received classical education in Latin, Greek and higher mathematics. Back in the day, such tutelage was common to well-born boys of his age.

Interestingly, Da Vinci showed his artistic prowess early on, and in his teenage years, he was sent to Florence to work under the prominent painter and artist Andrea del Verrocchio. During those years, he learnt many crafts, such as drawing, drafting, carpentry and metallurgy. It is believed that his talent became so overwhelming that he even surpassed his master, Verrocchio, who, after seeing Da Vinci’s work, promised to never paint again.

Ambidexterity is the quaint ability of using the left and right hands with equal ease. Leonardo da Vinci was a man of many talents and being ambidextrous was one of them. The experts say he could write, paint and draw with both hands, simultaneously.

Researchers at the Uffizi Gallery in Florence have evidence that proves Vinci used his left hand to paint most of the artworks. Plus, his ‘mirror writing’ skill is pretty impressive as well. A few speculate that he cultivated this unique style to avoid unnecessary smudging of ink or charcoal, as he wrote from right to left using his left hand while others say such backwards-written texts were his way of encoding and protecting ideas against theft. The actual reason is still unclear.

Da Vinci was a helpless procrastinator. His perfectionist attitude and varied interests dissuaded him from completing his paintings. Countless Da Vinci artworks are, officially speaking, unfinished; the list includes St. Jerome in the Wilderness in the Vatican City (best explored with Vatican City tours), the Virgin and Child with Saint Anne and the iconic Mona Lisa (aka La Gioconda in Italian) held in the Louvre, Paris.

Wait, it doesn’t end here. Two of his first paintings: the Annunciation and the Adoration of the Magi – done with the help of Verrocchio were never declared ‘complete’ either. They are currently on display at Florence’s Uffizi Gallery.

Besides being a painter, Da Vinci was an accomplished engineer and inventor…

Leonardo da Vinci was a self-taught, open-minded engineer as well as a proficient inventor! For him, there was no difference between art and science. His artistic abilities helped him record nuanced mechanical concepts in the form of drawings and create blueprints for future generations.

Da Vinci developed an array of new machines for the new world. The National Science and Technology Museum Leonardo da Vinci houses several miniature models of his great inventions, including medieval tanks, flying machines and underwater vehicles. Fusing invention and engineering, this museum in Milan is an absolute must-visit.

However, if you are in Rome, don’t miss the Vatican and Sistine Chapel tours. Admiring Da Vinci’s masterpiece in the Vatican City in person is an unforgettable experience. An early reservation is recommended.